In this video clip, John Roberts, Senior White House Correspondent for Fox News, can be heard telling his colleagues, “we can all take off the masks”. Why? Because the information they now have shows that the Wuhan Virus, ( and yes, it is from China and that’s not a race by the way ), has been nothing but a giant scam, and has a fatality rate of “0.1 to 0.3” based on recent data and findings.

But then comes the biggest shock of all in the “hot mic” moment…the reporter that Roberts is speaking with then says, “we’ve all been vaccinated anyway.”.

Well, what the hell does that mean? We’ve all known something about all of this stinks to high heaven. We’ve been cowering in fear from an invisible bogeyman, a supposed Grim Reaper…waiting for the moment someone sneezes or coughs to run screaming to our homes, where we piss our collective pants in terror.

As I have feared, it seems the Chinese Coronavirus and the American response to it reeks of deceit and dishonesty. In fact, though the virus is real, it may be that it’s lethality is insignificant while it’s value as a weapon against the rights of American citizens is unlimited.

It’s been weeks since The United States began starving itself to death, like a convict on a hunger strike, over this much-feared Chinese virus. California, New Jersey, Michigan, and Virginia…all “blue” states with progressive democrat governors, have been shut down for weeks. Other states have followed suit, at least in some measure, to prevent the widespread death and mayhem that this “pandemic” was supposed to create.

The Federal government rolled out it’s all-knowing advisors, Doctors Fauci and Birx, both well respected experts in infectious disease. The President, depending on the advice of these experts, moved federal programs and money to combat what he was being told was the apocalypse. He even signed into law the largest redistribution and, frankly, printing of, money in history. And for what?

Nothing. Millions of unemployed citizens. Thousands upon thousands of businesses closed, perhaps for good. Doctors Fauci and Birx claim there will be no more shaking of hands, no more parties or concerts, no kids in school until a vaccine is created. When will that be? A year? A year and a half? For which strain? Long enough to use public panic to force through a “vote-by-mail” scheme that would effectively destroy the Republic and reduce us to a Banana Republic forever controlled by establishmentarian leftists? Regardless of political persuasion, can we all agree that unverified voting by mail would be a disaster, rife with fraud and abuse?

Time to rise, folks, ’cause you’ve been played. Time to leave your house and go to work, school, and social events like you’re John Roberts strolling through the White House press briefing.

“Is it really? That’s reassuring, everybody here has been vaccinated anyway” – Unknown White House Reporter 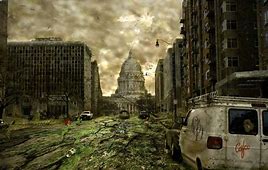 The Future According To Fauci

There is an enemy walking amongst us. An invisible enemy. An enemy that so far cannot be quantified and hardly identified. It strikes down the fortunate and the unfortunate. It renders it’s deadly recourse regardless of the measures attempted to forestall it. And it’s not the Sino-virus from Wuhan, as dangerous as that is.

In the effort to defeat the viral opponent that has been forced upon the shores of the United States, I fear we have unleashed a beast that cannot be quarantined. Interference of the State and the Federal government into the purpose and lives of it’s citizens has become normal in a way that none of us ever envisioned. The American public has already ceded much of it’s liberty in the name of protecting itself from what it supposedly fears…terrorism, economic trouble, the weather…and now the Chinese coronavirus.

If the Chinese Red Army invaded the United States tomorrow morning, in a fashion on par with 1984’s “Red Dawn” ( if you don’t get the reference or only know the 2000’s remake, stop now, you’re not allowed to continue reading ), and your life, liberty, property, freedom, and the future of your family were at stake, would you fight? If you were told beforehand that one, or even two, in every 10 fighting would die…would you surrender?

If you were faced with the option of sheltering the weak and those that couldn’t defend themselves, while exposing yourself to risk, would you?

Many of you answered ‘yes’ to those questions. So then  let me ask you this: if all you had to do to protect your family, friends, freedom, future and way of life was to self-mitigate the risk of spreading this invisible enemy, you know, like they are at the grocery store with plastic shields, facemasks and gloves, would you? Have we reached such a place where we are incapable of making decisions on our own to combat the effects of the Sino-virus?

The models of our doom, predicted a month ago and now irrelevant, are suspect. The numbers you see flashed on the screen on cable news each day about cases versus deaths are trash. How can we know the infection rate when no one is tested? What if, as awful as this virus is, it is widely distributed in the population and most are recovered, asymptomatic, or oblivious to it’s effects? Is cowering in your home, losing your job, losing your savings, and sending the world into a depression otherwise unknown before in human history worth this plague? I say no.

The experts have been incredibly wrong. 2.1 million people were going to be infected and 200,000 dead by the beginning of this month. Respected democrat-donating doctors Fauci and Birx have gone from trivializing the virus to stoking an all-out panic. “We must lock down for 18 months”, they say, economy and future be damned.  And for those of you who say, “Hey, we stopped the spread and ‘flattened the curve’ because of social distancing and lockdowns. That’s why the numbers are lower.” Well, with all due respect, no, that’s not why the numbers are lower…because that was factored into the equation in the first place. On top of that, the government now codes every death “assumed of being from Covid-19” as a death due to the virus. That’s odd. Perhaps that’s why many reports of virus deaths are reported as, “due to complications of the coronavirus”. It seems that there is an effort afoot to inflate the number of deaths attributed to the sickness. At the same time, the “confirmed cases” number is pure fantasy. To be confirmed, you must be tested. Have you been tested? Do not doubt it, many of you have already had this disease and fought it off or been asymptomatic. Would the scary ratio on TV be so scary if it said, “25 million confirmed cases with 12 thousand fatalities”? Between 3,600 and 9,100 people died of the flu every month between November 2018 and March 2019, did we lock the country down? During the Obama-era Swine Flu outbreak, 12,500 died. I don’t even remember seeing it on the news.

I truly wish we had this much of a national reaction to cancer, as it kills many more thousands each year than the Wuflu. In my opinion, the Doctors we have on this problem nationally are hammers, and all hammers see are nails. It’s time to weigh things beyond their considerations. 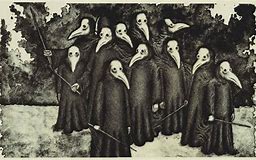 Our respected experts in the face of the Commie Cold.

What sense does it make to close businesses, schools, and restaurants while the grocery store is open? Isn’t everyone in the neighborhood going to the same grocery store? Is there a mass of deaths from employees at businesses deemed “essential”? The cashiers and stockers at the Safeway haven’t keeled over dead, have they? Under the current models and logic regarding the CCP-virus, Walmart would be the Valley Of The Shadow Of Death! Besides, isn’t it unconstitutional to tell me where I can and can’t go? To detain me without trial or purpose? To tell me that the 1st Amendment and it’s protections against being told where and when I can assemble are null and void? How about all of my constitutional rights…are they now ashes after confrontation with this invisible enemy?

The Walmart greeter, or so I’ve been told.

It’s time for America to open for business. It’s time for our government…federal, state, and local, to get out of our way and encourage some self sufficiency and responsibility regarding mitigating the spread of this illness. It’s time to get the hell out of China, period. It’s time to realize that our leaders and elites are garbage. It’s time for the president to get over his germaphobia ( odd isn’t it, that the only thing to sink his economic boom is directly tied to his own personal Achille’s Heel? ) and get this country moving again. Protect the sick. Protect the weak. Take precautions.  Because the treatment is going to not just kill the disease, but the patient as well.

“The only thing we have to fear, is fear itself.” – Franklin D. Roosevelt