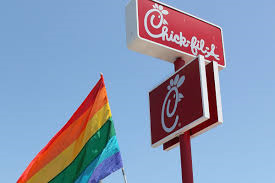 The American Experiment of freedom and liberty took another blow yesterday when Chick-Fil-A, a fast food chain founded and based in Atlanta, GA, announced it would cease any further funding of the Christian Charities it has supported for decades. The Salvation Army, The Fellowship of Christian Athletes, and The Paul Anderson Youth Home will no longer receive millions in donations from the fast growing company. At first, Chick-Fil-A released a statement claiming it was just “refocusing it’s charitable efforts” to specifically concentrate on “homelessness, education, and hunger”. Well, that’s odd considering that in The Salvation Army’s response, they remind us that they feed, clothe, and educate more people than any charity on Earth, regardless of what’s in their pants:

“We’re saddened to learn that a corporate partner has felt it necessary to divert funding to other hunger, education and homelessness organizations — areas in which The Salvation Army, as the largest social services provider in the world, is already fully committed. We serve more than 23 million individuals a year, including those in the LGBTQ+ community. In fact, we believe we are the largest provider of poverty relief to the LGBTQ+ population. When misinformation is perpetuated without fact, our ability to serve those in need, regardless of sexual orientation, gender identity, religion or any other factor, is at risk. We urge the public to seek the truth before rushing to ill-informed judgment and greatly appreciate those partners and donors who ensure that anyone who needs our help feels safe and comfortable to come through our doors.”

I guess that forced Chick-Fil-A’s hand, and they released yet another statement. This time at least they were honest. From Chick-Fil-A’s C.O.O. Tim Tassopoulos: “There’s no question we know that, as we go into new markets, we need to be clear about who we are,” – and, “We will still be closed on Sundays.”. Well, we now know exactly who you are. Greedy, globalist cowards that value crumpled, greasy dollar bills over the long held principles of your company. S. Truett Cathy, the founder of Chick-Fil-A, was a devout Christian, and he modeled his business upon those principles. The result was the fastest growing, most customer and employee focused fast food chain in The United States. Over the last decade and a half, Chick-Fil-A grew from a 1 billion dollar company to now one garnering more than 11 billion. Sounds like a winning formula, right? Well not anymore.

Chick-Fil-A’s founders did not support gay marriage, and neither did The Salvation Army. Needless to say that opinion, one shared by millions of Americans, did not stop gay marriage from becoming the law of the land. Yet still, LGBT groups, years after the legalization of their prize, cannot abide the past personal opinions of those that disagree with them. Chick-Fil-A has never denied a chicken sandwich, nor job, to anyone regardless of their orientation…because, you know, that’s the law. The funny thing is, Chick-Fil-A’s C.O.O. and corporate board are laughably out of touch. Why? Because they can cower and show their bellies all they want to the LGBT Mafia, it will do them no good: “In addition to refraining from financially supporting anti-LGBTQ organizations, Chick-Fil-A still lacks policies to ensure safe workplaces for LGBTQ employees and should unequivocally speak out against the anti-LGBTQ reputation that their brand represents,” Drew Anderson, GLAAD’s director of Campaigns and Rapid Response, said in a statement.   Well there you go. I have no doubt that the fast food chain will now desperately funnel cash into transitioning 7 year olds into drag queens so they can say, “See? Look! We deny biology too! We hate white males! C’mon Zhe and Zhem, can’t you see we don’t just tolerate but endorse your awesomeness! We’re super embarrassed about being founded in Georgia, too! We swear!”.

Listen, I know it seems like a small thing. In fact, the Daily Wire’s Ben Shapiro penned a column about it, and sure, it was OK. Funny, smart, etc.. But something he said in his essay troubled me greatly, and points to the larger problem facing us. In his column titled, “How to Disunite America”, he says: “If giving to Christian charities now bars you from opening a restaurant at the airport, our culture is beyond the point of no return… Do we really want a country where we shop based on political affiliation? Where every decision, every day, is rooted in partisanship? Should politics now determine where we buy a chicken sandwich? A country that punishes restaurants because its founders don’t openly celebrate same-sex marriage is a country destined to bifurcate. And that’s pretty fowl.”. Upon reading that, you might agree. You might say, “what’s wrong with that?”. I’ll tell you what. It’s not “If” giving to Christian charities bars you from opening a restaurant…our culture is done. That is already reality. It’s not, “Do we want a country where every decision…is rooted in partisanship?”, it’s “We already live in a country where every decision is rooted in politics.”. It’s not, ” A country that punishes…because… (you) don’t openly celebrate same sex marriage…”, it’s “You will be punished if you don’t just tolerate extreme leftist views, you must also love them, express them, and give them your money.”. Also, we are not “destined to bifurcate”, it’s “We are already fractured beyond repair.”.

The reason I have less-than-little hope for the nation of my birth, that has shown you and I more freedom and opportunity than any civilization to have ever existed, is the weak, mealy-mouthed, and completely feckless response to it’s destruction. When those who are the avatars of the fight for Western Civilization fail to even recognize they’re getting their asses kicked, where are we? Shapiro, and other NeoCon/Conservatives in the public sphere, is smart enough to know that battle is already at hand…yet they keep falsely warning of the dystopic tyranny that is coming, while ignoring or refusing to admit that it is already here. They needle and poke at Trump’s words, putting knives in the back of the seemingly only person in government that advances their supposed agenda, while talking of compromise…with an enemy that will give nor recieve any quarter.

I don’t think people like Shapiro have ever been in a physical altercation. Because in a fight, and I mean a real one, for your life and the lives of your progeny and loved ones, you will get dirty. You will fight dirty. You will certainly become severely undignified. You will claw, gouge, bite, and tear at your enemy…because the alternative is losing absolutely everything. Those we are fighting already acknowledge this, and that’s not just why they’re winning…it’s why they will win.