The Republic of The United States is embroiled in a cold civil war. As much as I wish it weren’t so, there can be no doubt about it.. From politics to culture, entertainment to information, the forces of tyranny abound. They are unrelenting, unforgiving, and most importantly, unopposed.

Benjamin Franklin understood the analogy of the Timber Rattlesnake, native to America, saying: “She never begins an attack, not, when once engaged, ever surrenders…she appears to be a most defenseless animal; and even when those weapons are shown and extended for her defense, they appear weak and contemptible; but their wounds however small, are decisive and fatal: Conscious of this, she never wounds till she has generously given notice, even to her enemy, and cautioned against the danger of stepping on her.” – B. Franklin

I have not commented on the current state of “impeachment”, because that is not what is taking place. Impeachment is reserved for “high crimes and misdemeanors”, yet none of those have occurred. No criminal charge, for the first time in U.S. presidential history, has been alleged nor charged, only partisan and naked corruption of The Constitution by a single political party…that holds one half of one house of Congress by a slim majority. Some call it a legitimate process…yet they are not backed by history, law, or circumstance.

No, what we are seeing and experiencing is the collapse of what better men ( they were men, get over it ) organized and gifted to us. Namely, freedom and liberty as has never been before recognized, enshrined, and guaranteed by any nation. Their only failure was to place a level of trust in the populace that is not deserved in modern times. They never could have imagined that the new experiment in freedom they had created would be so taken for granted…or in fact, so despised and undermined.

The reason so many have lost sight of the true nature of what America represents is simple: stupidity, laziness, ignorance, and arrogance. The populace has been dumbed down, watered down with unassimilated persons, and made entitled, without reverence for the simple truth of what The Founders put into writing. And what is that, you ask?

That our rights are natural ones. Let me explain, for the ignorant among us, what that means. The rights listed by The Constitution and Bill of Rights are not granted by men or by government, they are instead recognized by those documents as being given by God, or for the agnostics and atheists…Nature. Rights given by men and governments may be modified, regulated, or simply taken away. Rights that you are born with cannot. Many people are simply too stupid or too arrogant to understand that concept. The reason why we must not accept infringement of these natural rights is an easy one to understand…no man/woman can legislate away, nor seek to undermine and regulate, the rights granted by natural law, and any effort to do so must be met with righteous force. 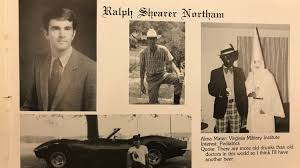 The blackfaced or Klan-robed, and typically corrupt, governor of Virginia, Ralph Northam, has engaged his 5 seat party majority to attempt to overwrite the natural laws of his citizens. Namely, the right to bear arms as recognized by the 2nd amendment. An amendment with the sole purpose of guaranteeing citizens the right to defend themselves against a tyrannical government. Over 22,000 people of all creeds and colors ( more than the total attendees of the pussy-hat wearing Women’s March of yesteryear in Washington, DC may I add ) showed up to object to his and his party’s nullification attempts, and thankfully no insurrection or violence occurred. However, regardless of the show of support for constitutional rights, Virginia has still drafted its  laws that violate the Bill of Rights. Will the next rally of support go differently? Only time will tell.

The confederates in government have much more to do, though. They have impeached an elected and successful president, with no thought to the consequences. Those whom we have placed our trust in to defend that office, the Republican party, are on track to betray their oaths, like they have so many times before, in service to their corporate globalist masters. My prediction is that this farce of an impeachment will be “surprisingly” successful, with the traitorous and bought-off legislature delivering the death blow to the Republic. There will be much talk of “principles” and “process”…while neither is honored or defined. The current president is an anomaly to the aristocracy, and after all, another citizen defender of the Republic cannot be allowed, and an example must be made.

We are left with dwindling options. A rotted and depraved society, in opposition to science and history…a decrepit and doddering ruling class, and an uneducated (Universities do not bestow such a thing anymore, only indoctrination and propaganda) and spoiled population have all converged into a great, mindlessly stomping beast. The question that you should now ask yourself is: “Will I finally stand against this usurpation? Am I willing to be like the Timber Rattlesnake? Have the corrupt and unwary finally ignored the tell-tale rattling warnings at their feet? Has the drunken and trampling body politic stepped onto our backs?”.  I know my answer…do you?

“So be it, threaten no more. To secure peace is to prepare for war.” – Don’t Tread On Me, Metallica