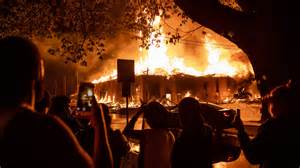 This is your country.

For a brief moment following the death of George Floyd at the hands of Derek Chauvin, people of all stripes were joined in disgust and sadness. Sadly, that moment quickly passed. In my previous column, I detailed the event as well as the need for law enforcement to re-examine it’s policies and practices. However, in the days since, major cities in the United States have devolved into rioting, looting, and violence. With mainstream corporate media, forever devoted and engaged in radical leftist politics, spurring on the mayhem while excusing the behavior of criminal rioters.

Leftist politicians, celebrities, and media personalities have decided to stand on the side of anarchy, ironically for pure power-grab politics and profit. Cities, states, and towns controlled and neglected by the left have become warzones, and the trendy hypocrites and virtue signalers have assembled in force in an attempt to deflect from the truth. What is the truth? That the insidious lies of identity politics, diversity, inclusion, and intersectionality have sewed the wind, and in many places across the country, we are reaping the whirlwind. In the madness of the #resistance, leaders across the nation are guilty of dereliction of duty in their quest to remove the Bad Orange Man. 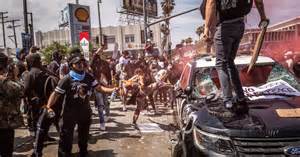 In the closing lines of my last column, I asked if law enforcement was willing to stand up against the bad apples in their midst. Well, in the wake of the past week, they haven’t had the opportunity because nihilistic and anarchist thugs have decided to demonstrate their ignorant rage.  What should be national unity has become the beginning of race and class war. What should be a careful and serious examination of the citizen’s relationship with it’s leaders and law enforcement agencies has devolved into chaos. 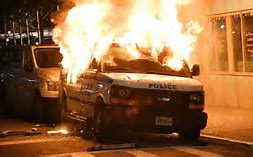 To those that think this will devolve into some kind of civil war that you recognize from history, you are wrong. There will be no banners and flags, no orderly lines of combat. To the people that think declaring themselves “allies” to racists and thugs while engaging in meaningless virtue signaling will exclude them from violence, you are wrong as well.  If good people, of all races and religions, do not stand on the side of stopping the violence in the streets, America is over.

Also ,if  you are someone that uses the language of “my people, our people” and “them” and “they”, I have bad news for you…you are a racist, regardless of the group you identify with or are characterizing.

On a final note: If you’re a good person that has bent the knee to these protests, and is legitimately concerned about issues of race, police violence, and the subjugation of civil rights, I understand. If you are someone that is unhappy with the current system of justice in the United States and want to change it for the better, I understand. But know this, by endorsing, ignoring, or advocating what’s happening on American streets you are going to indeed get “change”, but I assure you it won’t be the kind you like. If and when martial law is activated, freedom as you have known it will completely disappear, along with any civil rights you now enjoy. Get ready.

” But mark my words. This war will not be fought on the frontier or on some distant battlefield, but amongst us… amongst our homes. Our children will learn of it with their own eyes, and the innocent will die with the rest of us.” – Benjamin Martin, The Patriot